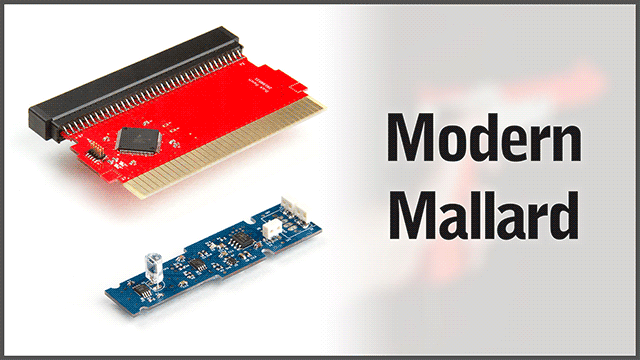 Modern Mallard lets you play it again on your existing LCD TV, using an original NES, an original Zapper light gun, and an original game cartridge.

The Modern Mallard kit consists of two parts. First, there is a replacement board for the Zapper that lets it 'see' LCD TVs. Second, the kit includes a patch board that is added to the original game cartiridge. The patch board intercepts the Duck Hunt game code as the game is being played and tweaks it to allow the game to tolerate the latency present in an LCD TV. Together, the Modern Mallard kit components allow you to play your copy of Duck Hunt on virtually any modern television, with the gameplay exactly as you remember it.

The Modern Mallard kit was presented as a Kickstarter campaign in the summer of 2018. Unfortunately, it failed to get funded through that effort. Although we are continuing to look at ways to make the Modern Mallard kit available for purchase through other means, no kits are for sale at this time.

More technical information about how Modern Mallard works is in a forum thread as well as further down the Kickstarter page.


An independent review of a Modern Mallard prototype: